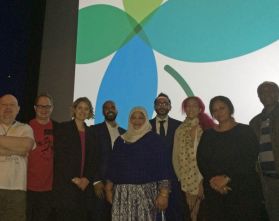 Training video stars see themselves on the big screen

Every movie première attracts an eager audience, and nobody needed a red carpet to work out who were the stars of the show at the MERIT Vanguard programme’s World Mental Health Day event on 10 October.

Every movie première attracts an eager audience, and nobody needed a red carpet to work out who were the stars of the show at the MERIT Vanguard programme’s World Mental Health Day event on 10 October.

The programme held the first screening of five Mental Health First Aid (MHFA) training videos which were made recently in partnership with Fresh@CU, part of Coventry University. Two more videos are currently being edited, bringing the total to seven. Each film lasts around eight minutes and features a service user from the West Midlands, discussing their personal journey in their own words. 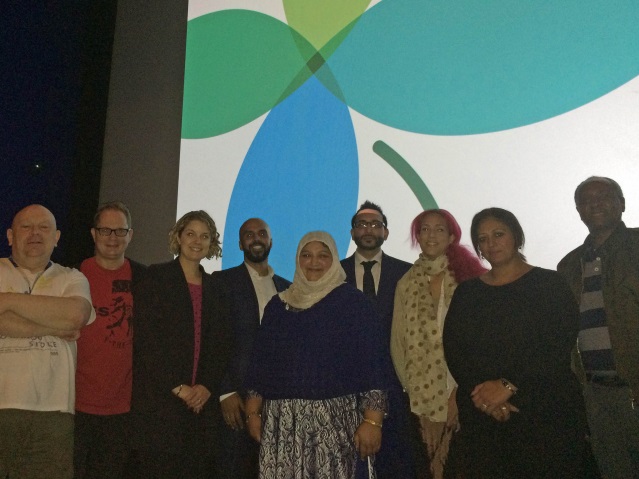 Service users who feature in the training videos watch themselves on the big screen, alongside MHFA instructors from trusts across the MERIT Vanguard partnership.

Zarqa Shah, a service user from Birmingham, is the star of one of the films, in which she describes her diagnosis of bipolar disorder, discusses how it has affected her, and lists some of the things which often make her feel better, such as her hobby of stand-up comedy. In her film, Zarqa says:

“About 12 years ago, I got the chance to go on a comedy course.I really enjoyed it, though I’d never realised you could actually be taught to be funny. When I did a show at the NIA, there was an imam in the front row.I was a bit worried about what he might think, but he laughed the most!”

There are over a dozen qualified MHFA trainers across the trusts in the West Midlands, from all sections of our community, and some of them were present to view the new training materials and receive certificates to mark their achievement.

The two-day MHFA course equips people in the community with the skills they need to be able to help keep someone safe until they can receive more qualified help. The modules look at different forms of mental health problems, and how a person may act or respond.